In space no one can hear you scream goes the tagline of one of the most important films, in not only the horror genre, but science fiction film history. In the seventies, the decade of the original ‘Star Wars’ film, ‘Alien’ was the culmination of a merging of both horror and science fiction to sublime effect. ‘Alien’ was in many respects the ultimate video nasty – that VHS your father would warn you never to touch due to the evil within that would stamp itself on your young mind.

At first look things didn’t bode well for little known British film director Ridley Scott, whose only experience with film was a small Napoleonic historical feature ‘The Duellists’. He bought a script by Dan O’Bannon bizarrely titled ‘Star Beast’ and hired a Swiss surrealist painter called H.R. Giger as a creature designer. All this spelled a low budget B-movie affair as opposed to a classic film that ‘Alien’ has become.

The entire aesthetic of ‘Alien’ like the original ‘Star Wars’ film was based around a gritty, used and realistic future. In this reality the world weary cast (much older than most slasher film fare) were portrayed as average corporate joes working a company mission for their ‘shares’. From the beginning of the film it is made apparent that the expected hero is Captain Dallas (Tom Skeritt) as opposed to Lt. Ellen Ripley (Sigourney Weaver) who is expected to be the horror obligatory damsel in distress. Seething under the surface there is a forbidding sense of weird Lovecraftian dread from the beginning of the film as a distress signal is picked up by the mining space ship Nostromo’s computer MU-TH-UR 6000. Thus leading the crew  through hazy helemet cams and radio static to a planet (LV-426) where a downed derelict alien spacecraft, shaped like a beckoning woman’s legs is found complete with a plethora of menacing eggs and a huge elephant faced fossilized creature.

The gritty futuristic dystopia was popular in Sci-Fi in the late 70s and early 80s.

‘Alien’ is a triumph in astrobiology in depicting an alien life forms lifecycle. Shockingly one of the alien eggs opens and a ‘facehugger’ attacks the erstwhile crew member Kane (John Hurt) and a power struggle between Ripley and Dallas arises as she refuses them entry to the ship with the parasite attached to Kane on quarantine grounds. The company science officer Ash (Ian Holm) lets the crew back aboard and his attempts to remove the creature from Kane’s face is unsuccessful. Eventually the creature falls off and dies and Kane awakens seemingly fine. What follows is one of the most powerful scenes in film history. Ridley Scott did not inform the cast in the script what was going to happen leading to genuine reactions of horror and dread when Kane (John Hurt) writhes and convulses as the phallic alien ‘chestburster’ pops through his body much to the horror of the audience and crew alike. Essentially the film plays on a horrifying psycho sexual male fear of rape as the phallic ‘chestburster’ and vaginal ‘facehugger’ attacks in a penetrating manner. 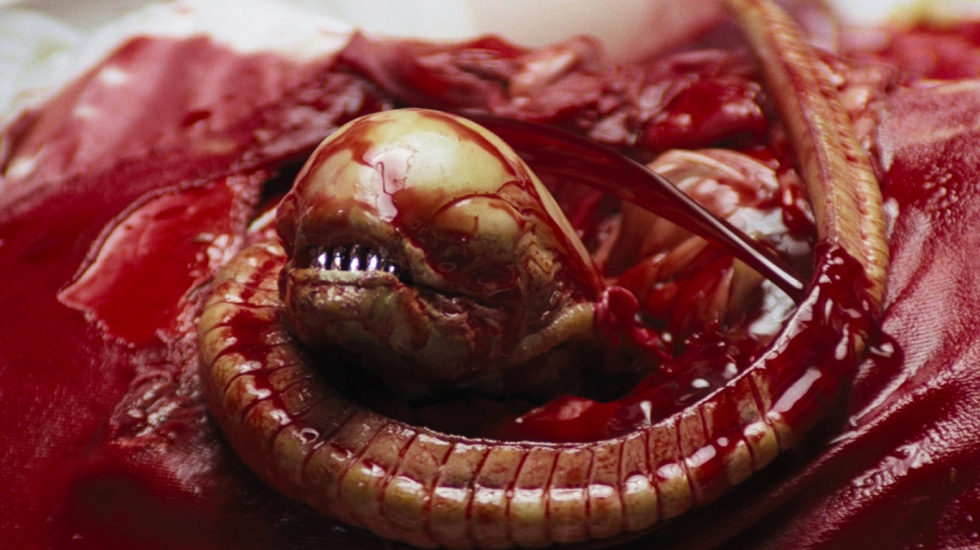 The infamous and frightening ‘chestburster’ alien

Quickly the film takes on a haunted house in space scenario as the eponymous alien becomes even bigger and more menacing.  The suspense for the final reveal of the creature is superb as we are given only brief glimpses of the creature throughout. Systematically it kills off the crew one by one Brett, Parker and Lambert including the thought to be hero Captain Dallas (Tom Skeritt) in a climatic air duct scene leaving the crew’s safety in Ripley’s hands. Ash is revealed to be an android under company orders to retrieve the Alien alive with all other crew expendable and he is destroyed by the ship’s crew. The Alien eventually kills off all the crew except for Ripley and the ship’s cat Jonesy and she is forced to set the ship to self-destruct and escape with the shuttle. The alien sneaks aboard and Ripley is forced in her catharsis to blow it out the air lock in the culmination of the film’s action leaving her in hyper sleep adrift in space.

‘Alien’ was received with huge critical and box office acclaim upon its release. ‘Alien’ won the 1979 Academy Award for Visual Effects and was inducted into the National Film Registry of the Library of Congress in 2002 for historical preservation as a film which is “culturally, historically, or aesthetically significant”. It spawned three sequels to varying degrees of success although none of them bar James Cameron’s ‘Aliens’ came close to the purity and horror of the original film. Many have imitated yet few have come close to the power of ‘Alien’.

One thought on “Alien: A Retrospective Film Review”